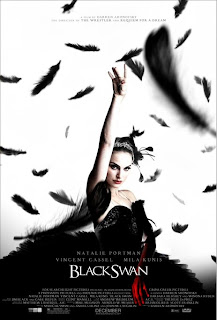 Does everyone know what's happening with whole Black Swan controversy?  Sarah Lane, a dance double for Natalie Portman in the Black Swan, recently came out with comments suggesting that Portman only did 5% of the actual dancing in the film and that Lane was never properly credited and instead told to hide in the back during Oscar season.

Since then Portman's fiancee, Benjamin Millipied (and choreographer on the film), fellow actress Mila Kunis and the director Darren Aronofsky have all spoken up in defense of Portman and her commitment and determination to the role.  In fact, Aronofsky released this statement "doing the math" and standing by his actress.


“Here is the reality. I had my editor count shots. There are 139 dance shots in the film. 111 are Natalie Portman untouched. 28 are her dance double Sarah Lane. If you do the math that’s 80% Natalie Portman. What about duration? The shots that feature the double are wide shots and rarely play for longer than one second. There are two complicated longer dance sequences that we used face replacement. Even so, if we were judging by time over 90% would be Natalie Portman.

And to be clear Natalie did dance on pointe in pointe shoes. If you look at the final shot of the opening prologue, which lasts 85 seconds, and was danced completely by Natalie, she exits the scene on pointe. That is completely her without any digital magic. I am responding to this to put this to rest and to defend my actor. Natalie sweated long and hard to deliver a great physical and emotional performance. And I don’t want anyone to think that’s not her they are watching. It is.”

Sarah Lane, who was probably trying to get recognition for her role in the movie has seen it all blow in her face.  She was trying to make it look like Natalie lied for the role while Natalie hasn't denied that a double was used in the movie for the hardcore dancing.  But at the end of the day, it's the acting that resonates through.  Yes, it is a dance film but it's not only about that.  Black Swan is highly performance oriented film, an acting piece that revolves mainly around one character, Nina played by Portman.  As Roger Ebert of the Sun Times, rightly pointed out:

Let us not forget Natalie Portman did ALL of her own acting in "Black Swan," and that's why she deserved her Oscar.less than a minute ago via SocialOomph


That is all that needs to be said on the matter.  Let the acting speak for itself!!