The Hunger Games: Let's talk about the Tributes!

So, obviously in the last week, there has been some major The Hunger Games casting afoot.  Now that the main tributes, Katniss and Peeta, and oh yeah, Gale too, have been announced, it's time to find out about the other districts.

Here are the Tributes from District 11, Rue and Thresh 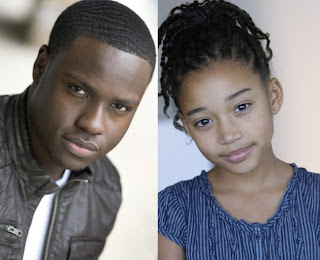 (Pics: Entertainment Weekly)
Newcomers Dayo Okeniyi and Amandla Stenberg will play the Tributes from District 11 Thresh and Rue respectively.  Great choice in picking unknowns for the part.  There has been quite a big discussion on Peeta and Gale's casting choices with many fans on the fence or against the filmmaker's choices.  Prior to this, buzz was that Will Smith's daughter was a lock for Rue and I'm glad it's not Willow Smith as Rue, we need to bond with Rue just as Katniss does and Willow has too much recognition to bring to the role.  Both Thresh and Rue are friendly towards the District 12 Tributes, Katniss and Peeta, it'll be nice to see how this plays out.  Thumbs up here! 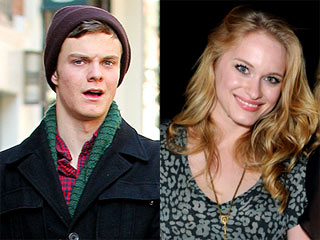 (Pics: Entertainment Weekly)
District 1 is not far behind.  The Tributes Marvel and Glimmer have been cast too, with Leven Rambin (Grey's Anatomy) as Glimmer and Jack Quaid, son of Meg Ryan and Dennis Quaid, is Marvel in his debut feature film.  Both Marvel and Glimmer are ruthless Career Tributes from popular District 1 and are a threat to both Katniss and Peeta competitively.  I've imagined them both to both big and threatening so I hope that the actors measure up to the part, especially Jack Quaid, he's a bit on the skinny side. 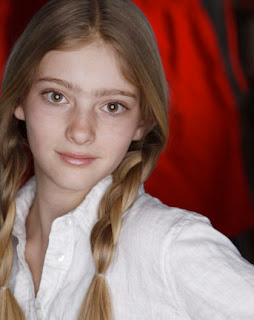 (Pics: Entertainment Weekly)
And finally, the role of Primrose Everdeen, Prim, goes to another newcomer Willow Shields.  Prim is the younger sister of Katniss and whose name is first called out as a Tribute from District 12.  Katniss decides to take the place of her sister because she can't bear to see her be harmed.  Again, here I've imagined Elle Fanning as Prim since I heard the movie was to be made, but let's see how Willow does.  Prim is at the of the series and another fan favorite character.
That's it for the casting new for now.   But more casting news is headed this way, Elizabeth Banks is said to be in talks for Effie and I'm sure the roles of Cinna and Haymitch should be announced soon.   And if you're on Facebook, go ahead and "like" The Hunger Games Tributes page where you'll get up to the minute news on the rest of the Tributes.
Posted by Sonal at 4:42 PM