Let's kick things off on the day of the royal wedding with a little bit of royal indulgence via Pixar, shall we?  As you may know, London is one of the pit stops in the Cars 2 universe releasing this June and today let's see the city through Pixar's eyes.  Also, the good folks down at Disney Pixar released this funny teaser trailer and poster via Stitch Kingdom that features a cameo by Her Royal Highness, the Queen.  Just in case you couldn't make it to London. 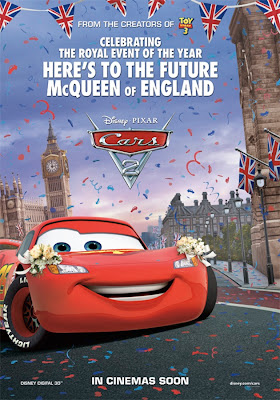