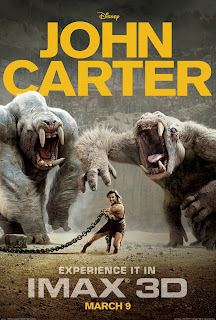 I wanted to like this film so very much.  Andrew Stanton is a favorite amongst the Pixar directors as his two previous films Finding Nemo and Wall-E rank high in my all-time best-loved movies.  The genre and story of John Carter is something I would naturally seek out, space and fantasy are one of the better combinations if explored well.  And I don't need to say more on Taylor Kitsch aka Tim Riggins (Texas Forever!).  Unfortunately, all these combinations could not come together to make the film a satisfying experience.

The box-office failure of John Carter and the subsequent fallout of power at top of Disney is well-documented and everyone has a opinion of the film but I wanted to watch it despite the negative press and form my own ideas about the film.  I'm glad I did because there are certain things to admire in the film but its execution fell through someway along the way.

The movie primarily takes places on the planet we know as Mars but called by its inhabitants as Barsoom.  When we are first introduced to Barsoom as there is a kind of civil war taking place with the leader of Zodanga, Sab Than (Dominic West), in an air battle with the last resisting city of Barsoom, Helium.  Suddenly three bald men in robes materialize out of thin air.  The evident leader, Matai Shang (Mark Strong) promises Sab Than a weapon that harnesses a power blue ray that demolishes anything in its path as long he does what Matai Shang tells him to.  Sab Than agrees.

Back on Earth in 1881 Virginia, or Jasoom as the people of Barsoom call it, a strange man is following John Carter (Taylor Kitsch).  As he tries to throw him off, John stops to send a telegram to his nephew Ned (Daryl Sabara) telling him to come meet him at once.  When Ned steps off the train platform, John's butler sadly informs him that his uncle is no more.  Ned is shocked.  John's lawyer reads him the terms of his will where everything is left to him including his uncle's private diary.

Ned begins to read to find out what his uncle was up to and figure out what could have lead to his sudden and mysterious death.  John starts, through his journals, to tell Ned about his unbelievable adventure that started when he was in the Arizona territory looking for a cave filled with gold.  He is stopped in his quest by Colonel Powell (Bryan Cranston) who wants him to join them fight the Apaches.  He resists and is thrown in jail.  This was a funny sequences where John does not absolutely give up trying to escape, he even jumps out the window.  This tells us something important about our hero.

While escaping (again!), John is caught between the Apaches and Colonel Powell and his men.  A fight ensues and he aids the badly injured Colonel Powell to hide near some caves.  The Apaches think it a bad omen and run away.  John thinks this might be his cave he's looking for and goes in.  A bald man in a robe appears (who we now know as a Thern) and tries to kill him but John surprises him and shoots him instead.  Before he dies, he utters a few words and is clutching an ornate medallion.

John seizes that medallion and is transported to Barsoom.  Disoriented, he tries to get his bearings and he discovers he has superhuman abilities in jumping.  Some of the alien species of Barsoom known as Tharks capture him and take him as a prize.  Their leader, Tars Tarkas (Willem Dafoe), is impressed with Carter and his abilities; the rest of the tribe is not.  Another Thark, Sola (Samantha Morton) is commanded to look after him.

While he's with the Tharks, Sab Than and his army tries to capture the missing princess of Helium, Dejah Thoris (Lynn Collins) who has run away rather than marry Sab Than and unite Barsoom so he doesn't destroy her city.  John sees this and rescues Dejah.  Now the Therns know about John and how he managed to transform himself to Barsoom.  But Dejah also recognizes John's potential, like Tars Tarkas, and wants to recruit him to fight for Helium.  But John is done fighting for wars and causes anymore, he just wants to get back home.

The journey of how he decides to pledge himself to fight for Barsoom and for Dejah makes the latter part of the film as John gets a renewed purpose in life.  There is so much going on the film and you really have to pay attention or you'll be lost.  I think this was the problem with what went wrong, it was just too much information.  The film picked up speed towards the end but it was too late.  The casting was also a problem for me, I felt the chemistry amongst the cast was just not there.  I thought Taylor Kitsch looked too young to play John Carter but apparently the actual character of John Carter of Mars written by Edgar Rice Burroughs never ages and looks forever young.

2012 marks a hundred years since the characters and settings of Burroughs' work have existed.  It's been that long since many people especially Disney have tried to bring the story to screen.  After so long, it deserved a better presentation.  Like I said at the beginning, I really want to like the movie but it just could not come together for me.  The film has amazing presentation of the sets and highly believable visual effects and motion capture but that doesn't disguise the fact that the story never manages to connect.  This being the live-action debut of Andrew Stanton and the fact he's worked as screenwriter on so many Pixar features is astonishing that more focus wasn't given to make the script stronger.

If you really want to explore the story and find out more about John Carter of Mars, I'd suggest you refer to Burrough's original stories.  That's certainly what I'll be doing.

Directed by Andrew Stanton, Screenplay by Andrew Stanton, Mark Andrews and Michael Chabon, Based on the story "A Princess of Mars' by Edgar Rice Burroughs, Cinematography by Daniel Mindel, Editing by Eric Zumbrunnen, Music by Michael Giacchino.