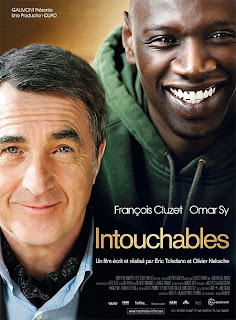 Intouchables is the story of two men from completely different backgrounds and tastes who by the end of the film know each other as well as they know themselves.  It really is the feel-good French film of the year.

Driss (Omar Sy) is driving his friend Philippe (Francois Cluzet) at night through the streets of Paris.  He glances behind at a police car and wagers Philippe that he can lose them for a 100 euros.  Philippe challenges him and they are off.  Speeding away, he almost makes until a van stops abruptly in front of them and the police angrily approach them.  But Driss is unfazed.  He turns the situation around and says that they were on their way to the ER as Philippe, being quadriplegic, is having a fit. He's not really having a fit but Philippe plays along as now the bet is up to 200 euros that they will get a police escort to the hospital.  They do.  Thus we are introduced to the unlikely friendship of Philippe and Driss.

It all begins with a call for a job.  In the flashback, we are shown that Phillippe is a wealthy man who is injured in paragliding accident and is paralyzed from the neck down.  He therefore needs someone to constantly take care of him.  He has a line of qualified yet stuffy prospective candidates all lining his hall waiting for their turn at an interview.  Driss is the odd man out and grows impatient waiting.  He bursts into the room holding interviews and demands that his paper be signed so he can be on his way.

He needs the signature to show he tried and get his welfare benefits.  There is something about his attitude and personality that impresses Philippe and he calls him back the next day.  Driss is surprised to learn that he's on a trial to see if he can last as Philippe's caregiver and he comes to learn more about Philippe's condition.  It's timely that he accepts Philippe's offer as he thrown out of his own home for being irresponsible and wayward by his mom.

As Driss learns all that goes in the care of a quadriplegic, Philippe comes to know more about his new employee and his spontaneity.  There are number of amusing moments.  Driss is dismayed to know he has to help Philippe were blood pressure stockings to stimulate his legs while Philippe is so used to be taken around in his wheelchair accessible van that he's surprised when Driss insists on the Maserati to go out.  Both of them teach each other something new and give their perspectives on it.  Philippe introduces Driss to classical music and opera while Driss puts on some Earth, Wind and Fire for him, music to dance to. Driss can't understand the abstract art that Philippe spends thousands of euros on and decides to paint his own which everyone agrees is impressive for a beginner.

They begin to have an effect on each other lives as they open up on their past.  Philippe is grieving for his late wife who died of cancer and thinks his disability is his way of suffering as she did.  His adopted daughter Elisa is a typical sullen teenager who Driss sorts out and helps her with her boyfriend troubles.  Philippe also writes letters to a woman named Elenore in Dunkirk.  Driss pushes the relationship along and insists that they talk on the phone and eventually meet up.  Meanwhile, Driss opens ups about his life and how he's actually adopted by his aunt and uncle and feels responsible to look out for his younger cousins.  Despite his criminal record of robbery, he does have good intentions at heart but can't see things through.

Eventually, they do move on as Driss has to go back to go take care of his family and get another job and Philippe hires one of those qualified candidates from the beginning of the film.  But it's not the same.  As Philippe rightly points out towards the middle of the film, Driss treats Philippe without pity and often times forgets that he can't just pick a phone or do many normal things.  Philippe appreciates this.

At the end of the film, we are back to the hospital and Driss and Philippe set off on a drive again towards the sea.  There's a lovely and sweet ending which I won't spoil but I was left with a smile on my face.  In fact, there were many instances where I laughed or smiled.  It's easy to see why this film became the second most watched film ever in France and won Omar Sy the Cesar Award for Best Actor.  His performance is infectious and without any artifice.  Cluzet is terrific as well, alternating through despair at his situation and secret smile at Driss' antics.  The film is based on the documentary made in 2004, A la vie, a la mort on the friendship of  Philippe Pozzo di Borgo and Abdel Sellou who are shown in the end credits.  This will join the list of my favorite French films.