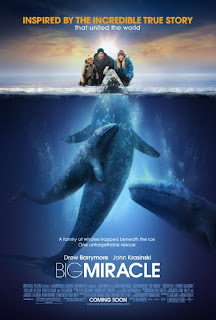 Once in a while, it's good to watch a movie like Big Miracle.  Inspired by the true story of the very real Operation Breakthrough on the rescue of three California gray whales trapped within the ice near the North Pole, the film is not ground-breaking cinema nor is it something that everybody will be talking about.  Yet I look upon it as a slice of history in a time when there were no smartphones and no internet and yet this narrative became "the" story that moved the whole world no matter what language they spoke.

Adam Carlson (John Krasinski) is a reporter up in Barrow, Alaska in 1988 who's just waiting for his big break.  There's not a lot that goes on in Barrow, the opening of the Mexican restaurant Amigos is big news for the town.  He's hoping a story can get to the lower 48 reporting for the main channels.  One day, Nathan (Ahmaogak Sweeney), a young Inupiat boy who Adam mentors asks him to catch his cousin on the snowmobile for a story.  Since Adam had promised, he agrees.  While on the ice away from town, he catches on tape water being sprayed in the air from the ice.  They go to investigate and find whales surfacing to the water through a small hole trying to breathe.

After confirming that there are three whales trapped under the ice, two parents and their baby, the locals assess that there must around 5 miles of solid ice until the whales can reach the ocean.  They must to do something to help them otherwise they will perish.  Adam puts together his report on camera and sends it to the channel in Anchorage.  From there, the story gets picked up by NBC on Tom Brokaw's nightly show and everyone across America takes notice, especially Adam's ex-girlfriend Rachel Kramer (Drew Barrymore) who just happens to be an environmentalist and Greenpeace activist.

Rachel starts off the campaign to save the whales by appealing to the Governor of Alaska, any companies who could have equipment to break the ice for the whales to swim out.  One such company owner is J.W. McGraw (Ted Danson) who has won a grant to drill in Arctic ice for oil and owns a barge that go through the ice.  Mrs. McGraw (Kathy Baker) cleverly manipulates her husband to give his barge for the whale rescue effort.  Colonel Scott Boyer (Dermot Mulroney) of the National Guard and his men will use their powerful helicopters to drag the barge to Barrow.

Meanwhile, over in Barrow, journalists from all over the country descend to cover the piece which has nationwide interest even from President Ronald Reagan himself.  While everyone waits for the barge to break the ice, things begin to go downhill for the whale rescue.  The small hole, no matter how many times is made bigger, begins to ice over by the freezing temperatures.  The baby whale, affectionately nicknamed Bamm-Bamm, finds it hard to sustain breathing and has cuts all over his face.  His parents, called Fred and Wilma, try their best to keep him alive.

There is good news and bad news as couple of home entrepreneurs bring over their de-icing machines to help the effort and meanwhile the barge gets stuck in an ice pothole.  There might be no whale rescue after all.  The journalist who come from all over the world, including Channel 7 news reporter Jill Jerard (Kristen Bell), aren't that emotionally invested in the story like Adam, Rachel, Nathan, the Inupiat people and the town of Barrow.  They start creating little holes in the ice leading up to the ocean so the whales can resurface.

And when things begin to look extremely dire, as this has become a national and international crisis, a decision is made to bring in Soviet ice-breaker ship which many are opposed to.  People put aside their differences for the whales.  Of course, in a movie such as this, there is a semi-happy ending as two of the whales manage to swim out.  The rescue effort is deemed a success and the humans all go home happy and feel as though they've achieved something.

The film nicely incorporates actual news footage from that era with reports and press conferences by President Reagan, Tom Brokaw, Dan Rather and the late Peter Jennings.  There's even footage the sportscaster at the Anchorage news station, Sarah Heath sporting serious 80s hair, later known to the world as Sarah Palin.  Sportscaster? Who knew!

Maintaining its earnestness throughout, the film shows how if everyone comes together to put aside their differences and do something out of goodness of your heart, what a difference it can make.  Maybe that's why this story captured the imagination of a nation and later the world.  Sometimes after all the depressing and cynical things we see in our daily lives and on televisions, it's nice sit back to watch a story like this.  The aptly named Big Miracle is truly moving!

Directed by Ken Kwapis, Screenplay by Jack Amiel and Michael Begler, Based on the book "Freeing the Whales" by Tom Rose, Cinematography by John Bailey, Editing by Cara Silverman, Music by Cliff Eidelman.