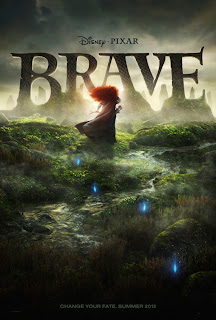 The 13th feature film of Pixar Animation Studios, Brave, should prove very lucky rather than unlucky as it means Pixar is back on track with its original content.  Apart from Monsters University next year, the studio is back to concentrating on new stories to tell instead of sequels and prequels as that's where their strength lies.

Brave is the story of Princess Merida (Kelly Macdonald) who really yearns to be her own person and not have to live up to the expectations of a perfect princess of her kingdom DunBroch and especially her mother, Queen Elinor (Emma Thompson).  Merida excels at archery and has her own views even though it may seem selfish or immature to others.  It takes a life-changing incident for her to realize that sometimes compromises must be made.

This is the first princess story that Pixar has tried to tell and they have deviated a bit away from the Disney model of princess stories.  There is no Prince here coming to save Merida, she has to figure out how fix things herself.  But Merida and her family have a strong bond that is prevalent in all Disney family films.  Previously titled, "The Bear and the Bow", the film was to be directed by Brenda Chapman who had worked as co-director on The Prince of Egypt.  But midway through, she left the project and was replaced by Mark Andrews.  She would have been one of the few lone female directors in animation.  Jennifer Yuh Nelson (Kung Fu Panda 2) beat her to it.

I could tell where Andrews had his influence on the film, there are bit more of action sequences in chasing the bear and a bit of infighting amongst the clans.  But I'm so glad that the core of the story and film remains the relationship between Merida and her mother.  It's the very best part of the film.  Queen Elinor discovers what her daughter is capable of and Merida discovers, as it has always been evident to the audience, that her mother wants what is best for her.  When a witch's spell dramatically changes Elinor, they are forced to actually communicate and listen to each other and work their way back to being a regular family again.

The bonding sequences between mother and daughter are both funny and touching.  When Merida thinks her mother is lost forever, a tear (or two!) managed to sneak out.  Thank heavens for the clunky 3D glasses to mask them.  The movie looks gorgeous.  It really is an extended tourism ad for Scotland.  The animals, the giant bear Mordu and Angus the horse, are extremely realistic and in Mordu's case, very scary.  From fur on the animals to Merida's hair which is insanely curly with sunset colors that pop onscreen.  Amazing hair and fur!

I liked the little nod to Hayao Miyazaki and Studio Ghibli with the will o' the wisps which reminded me of the little spirits present in My Neighbor Totoro.  Her younger brothers Hamish, Harris and Hubert are triple terrors in the castle who bring a smile whenever they are onscreen.  I hope we'll be seeing them in a short again soon. 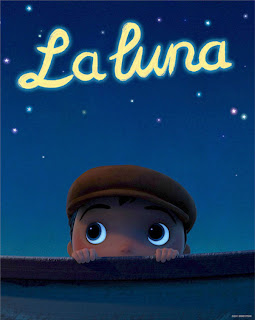 Which brings us to the short before the film, La Luna.  Nominated for the Best Animated Short this past February, La Luna, directed by Enrico Casarosa is beautifully told tale without much dialogue about the three generations who work together to take care of the moon.  Resident Pixar music director Michael Giacchino gives the score.  I love the idea of the short before the actual feature and I hope more studios besides Pixar pick up on it.  It's a great tradition.

Back to Brave, I think it's a worthy addition to the Pixar treasure trove.  I was extremely pleased to see so many boys also lining up to see what it being marketed as "Pixar's girl movie".   I don't think it really mattered to them.  So Princess Merida joins the rest of the Disney princesses and is the first princess to emerge out of Pixar but what audiences will take away is seeing Merida, the fearless and strong young woman who dares to believe in change.

PS: Stay tuned until the end for the lovely dedication to Steve Jobs and a post-credits scene.