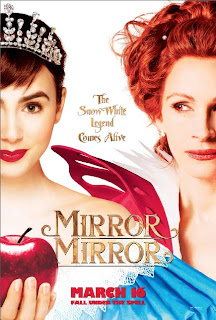 Fairy tales never get old no matter what century it is.  At their core is a story which we never tire of hearing generation to generation.  Every couple of years, there seems to be a resurgence of them.  Cinderella had a popularity surge a few years back with Ever After, Ella Enchanted and A Cinderella Story and now it's Snow White's turn.  First there were the TV movies, the very well-received TV show Once Upon a Time now on air, and two Hollywood films on Snow White released within a few months of each other.

Mirror Mirror had the first advantage of an earlier release though it could not be more different in tone and presentation from its rival Snow White and the Huntsman.  Starting with the title which doesn't include Snow White's name, Mirror Mirror deals mostly with the Queen in the story and her tenous relationship with her step-daughter.  The Queen (Julia Roberts) starts off by telling us 'This is her story, not hers'.  That's what she thinks but we all know that won't be true by the end of the film.

The story of how the Queen comes to power is told with some clever and beautiful animation in the beginning but while the film is funny at times and looks gorgeous onscreen, it doesn't have that extra spark that was present in the opening sequence.  Snow White (Lily Collins) is hidden away from the kingdom by the Queen saying she's not quite all there.  Snow White is the actual heir and leader of the kingdom but the evil Queen makes sure she never gets her right.  She suppresses everyone and collects taxes from the already poor people of the kingdom for her own extravagant and frivolous purposes.

This status quo continues until Snow White's 18th birthday when she ventures out into the kingdom for the first time to find the state of the people in the kingdom.  She comes upon Prince Alcott (Armie Hammer) and his traveling companion who have been robbed and tied up by the seven dwarfs who surprised the pair on stilts.  He insists they were 'giants'.  Yeah, sure!  The Prince and Snow are instantly attracted to each other but they go their separate ways unaware that they will meet again.

The dwarfs their victims of their clothes too so the Prince has to present himself before the Queen only in his pants.  After a wonderful exchange, The Queen comes to realize that the Prince is the answer to all her problems.  He comes from a prosperous kingdom and marrying him can take care of her financial troubles and he certainly is easy on the eyes.  At the ball thrown in his honor, the Prince meets Snow White again and is surprised to know that she lives in the castle.  Snow White is discovered at the dance and taken away by the guards, the Queen orders her minion Brighton (Nathan Lane) to kill her by delivering her to the Beast in the woods.

But as the story dictates, Snow White will be spared.  She is told to run by Brighton and comes upon the seven dwarfs home and after much debate, they let her stay at home.  From there on is the leadup to the big clashup between the Queen and Snow White.  It was really easy to guess the big reveal at the end but the screenplay has some funny dialogues especially coming from Julia Roberts.  When the mirror taunts her for having wrinkles, she retorts, "They're not wrinkles, they're crinkles!"

This film is poles apart from Tarsem Singh's last film Immortals but it contains his trademarks of incredible detailed and visually stunning costumes (designed by the late Eiko Ishioka who has done all of Singh's films) and sets.  I'd be very surprised if it doesn't get nominated for an Oscar for Best Costume.  The real disappointment in the film is the character development for the female characters.  The Queen hates Snow White but she's not quite that evil, you know, evil with a capital E.  Snow White is timid all throughout the film and gets some spark in the last sequence, it's a little too late.  And the characters all speak as though they are from the 21st century who think they're in period piece.

Julia Roberts seemed to having a lot of fun with character who lost her English accent on and off in the film but it never seemed as if she posed a threat to Snow White.  Lily Collins looks the part but its Armie Hammer really throws himself into the role showing he can do comedy well too.  His transformation into puppy love for the Queen was truly amusing to watch.

Mirror Mirror ends with a rollicking and fun Bollywood style end credits song by Lily Collins, 'I Believe in Love'.  The film begins and ends with strong sequences, the middle and the actual meat of the film needed more work.  Watch the film for its strong production values and stay for the bubbly, fun song at the end.

Directed by Tarsem Singh Dhandwar, Screenplay by Jason Keller and Marc Klein, Based on the story by the Brothers Grimm, Cinematography by Brendan Galvin, Edited by Robert Duffy, Nick Moore, Dean Zimmerman, Music by Alan Menken and Costume Design by Eiko Ishioka.