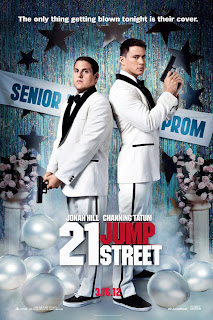 The best thing about 21 Jump Street is that is unlike other sequels and reboots, it doesn't take itself too seriously and is far away from being a clone of the TV series it is supposed to be based on.   In fact, as Deputy Chief Hardy (Nick Offerman) says early in the film, "We're reviving a canceled undercover project from the '80s and revamping it for modern times.  The people behind this lack creativity and they've run out of ideas, so what they do now is just recycle shit from the past and hope that nobody will notice".  That's stating the obvious.  The only thing that stays the same is the idea of police officers going to high school.

This film is surprisingly funny.  I had serious doubts about it initially but the film goes in with no expectations and doesn't stick to stereotypes and just makes fun of every character; it seems to do the trick.  Schmidt (Jonah Hill) and Jenko (Channing Tatum) are two guys who were never friends in high school as they were polar opposites.  This leads them to become friends while they train to become cops.  One has the smarts and one has the brawn and they help each other out.  Eventually, after they graduate out the police academy, they are assigned to park duty on bikes.  It's not as glamorous as they expected.  'Where are the car chases and explosions?', moans Jenko.

Even when they do get their first arrest, they let the most of the culprits get away and forget to read the one they've caught his Miranda rights.  Out goes the case.  Schmidt and Jenko are sentenced to 21 Jump Street (which happens to be a Korean church), headquarters for the undercover school unit.  They have to join high school to find out who has been dealing drugs that left a young kid (Johnny Simmons) dead.  Their undercover assignment pairs them as brothers Doug and Brad who infiltrate the cool kids and the nerds to find out who's making and dealing the drugs on school grounds and get the supplier.

As they mess up everything else in their careers, they forget their identities and Schmidt becomes part of the popular kids who do drama and care about the environment.  Jenko becomes a science nerd and has AP Chemistry which he pronounces as "App Chemistry".  They both begin to experience a high school experience much different from the first time around.  I liked that many characters pointed out how they looked too old to be in high school, especially Jenko by referring to him as a 40 year old.

Of course, with the partying and extra-curricular activities that become a part of their lives, they have to pay attention to the reason why they are in high school in the first place: to find the suppliers of the drugs.  And it all goes down at the prom.  Where else?  Schmidt and Jenko finally get that car chases and explosions that they were waiting all throughout the film for.

21 Jump Street was a pleasant surprise and trust me, I didn't think I would like a Channing Tatum film this much.  He seems to be picking his roles more carefully now and comedy seems a good fit for him.  His character in the film is so taken aback when he realizes the social hierarchy in high school has changed and now the popular and cool kids are the ones he used to pick on and even blames Glee for changing perceptions.   His friendship with the science geeks was unexpected.  He shows actual growth from a dimwit to a cop who knows what he's doing.

Jonah Hill, who literally dropped the weight of a whole another person before the film, is his usual funny persona that we've seen in previous films before.  But he's still adorably awkward in the action scenes which completely works for him.  Both Tatum and Hill were executive producers on the film.  The movie even includes cameos from a few of the original 21 Jump Street gang in Peter DeLuise, Holly Robinson Peete and Johnny Depp.  Yes, Johnny Depp!  His cameo is hilarious and unpredictable.  So, if you're looking for a foul-mouthed comedy that will make you laugh, look no further than 21 Jump Street.