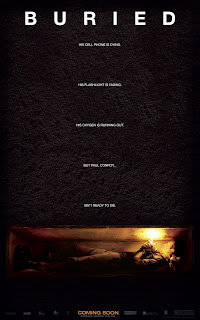 The incredibly thrilling Buried is all about the ordeal faced by Paul Conroy (Ryan Reynolds), a truck driver stationed in Iraq who is kidnapped and buried alive in a coffin.  All he has to keep him sane is a lighter, a cellphone and a torch for the entire length of the movie.

You have to see this movie to believe it.  I think I watched the last half hour with my mouth hanging open, I had no clue what was going to happen next.  This film rests on the very capable shoulders of two men, Rodrigo Cortes, the director and editor, and Ryan Reynolds, showing some fine acting skills here.  He's not just a pretty face, you see.  It's extremely important because as a viewer, you become emotionally invested in what will happen to Paul.

It is very hard to place an entire film in a solitary location and especially such a confining area as a coffin underneath the earth.  There is no flashback, no parallel B-story of any other character and that's what adds to the realism of the story.  You are pulled into Paul's living nightmare and experience it alongside him.

Buried is a very fine American debut from Spanish director Cortes and it's a shame that it didn't get more recognition during awards season.  This one will stay with me for awhile and I look forward to Cortes' next venture.