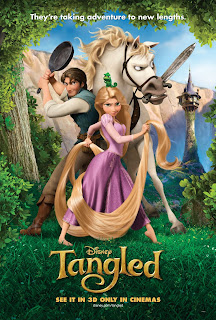 Disney's 50th animated feature Tangled (what an incredible achievement!) doesn't disappoint.  It has all the requisite things that make it a typical Disney film: a strong female lead who knows what she wants, a hero who won't know what he wants until he meets the heroine, a cast of supporting characters who amuse and entertain us and music that will leaving you humming from the theater.  Honestly, what's not to love?

Tangled is the tale of Rapunzel (Mandy Moore), a princess stolen during infancy and kept locked away in a tower until the day a thief called Flynn Rider (Zachary Levi) tries to hide in her tower and changes her life.  The lead characters, Rapunzel and Flynn are extremely likable.  Rapunzel, with her impossibly big eyes and that hair, is so giddy at being allowed to break all the rules because she wants to see what lights up the skies every year on her birthday.  Flynn has to take her to see lanterns because she holds hostage an item dear to him, the royal crown.

Of course, it's not going to be as simple as that, though.  Fresh on their heels are Mother Gothel (Donna Murphy), the woman who kidnapped Rapunzel all those years ago, the palace guards, and the Flynn's former partners.  And Mother Gothel is seriously bad, she only uses Rapunzel to keep herself young.  Obviously, you can guess what happens next.  Flynn and Rapunzel make it to see the lanterns in one of the most breathtaking parts of the whole film, the lake and the lanterns that float over it are absolutely gorgeous.  It had echoes from The Little Mermaid with Ariel and Prince Eric.   The song, "I See the Light" is typical Alan Menken and that's a good thing.  Who knew that Zachary Levi could sing so well?

I mustn't forget Maximus the horse and Pascal the chameleon, the supporting characters and friends of our hero and heroine who thankfully do not talk but provide the necessary humor and love in the story.  The animation of Maximus was the best, it got the biggest laughs in the theater.  I loved this throwback to the old Disney princess tales of the 1990s and it would be a shame if it was the last of the Disney princess stories because I grew up watching these kind of animated tales and it is what Disney is most well known for.