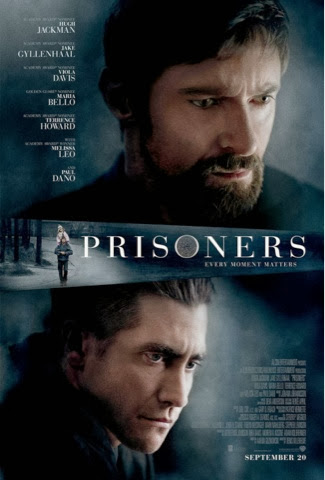 The thriller as a genre has evolved in the last decade or so. The chase, the hunt and the suspense have all become big action pieces sequences of cars, explosions and CGI. So when a quiet thriller like Prisoners comes along, we must appreciate it for its excellent storytelling and the non-reliance of the big spectacle in the final act.

A Thanksgiving lunch among family friends leads to the disappearance of the young daughters in the families of Dover and Birch. They all handle the news differently. Keller Dover (Hugh Jackman) is fixated on possible suspect Alex Jones (Paul Dano).  Franklin (Terrance Howard) and Nancy (Viola Davis) Birch are experiencing the various stages of grief and anger. While Grace Dover (Maria Bello) can barely get herself out of bed.

Detective Loki (Jake Gyllenhaal) who's been assigned the case has to deal with them all while pursuing the elusive kidnapper and trying to find the girls, alive. Believe me when I tell you that no summary can do justice to the way these plotlines unfold onscreen.  Director Denis Villeneuve (Incendies) and legendary cinematographer Roger Deakins set the up somber, wintery mood which is accentuated with stark shadows and gloomy interiors.

They describe how the characters are living in their own personal despair and hell as situations go out of their control. This is one of those rare films that doesn't give it all away in the trailer. There is much to discover and ponder as the film races along to the inevitable climax where it must all come to a head.

Kudos also to the great ensemble cast of Prisoners who all bring their A-game to make the film one of the best of this fall. Hugh Jackman doesn't get enough credit for his dramatic roles and Jake Gyllenhaal is very good as the detective who has never lost a case and doesn't want this case to be the first. But you won't be able to forget Paul Dano whose character is suspicious with a capital S.

It's been a long time since a great thriller held me from beginning to end. And the last scene will definitely make you gasp. In fact, certain parts of the film reminded me of the great Argentinean film The Secret in Their Eyes. I have a feeling the film's story can cause great debates about many of the characters' actions in the film especially Keller Dover's.

Make time for Prisoners in your fall movie schedule.