So I saw quite a number of movies in September and since it's almost the end of the month and I'm a bit pressed for time, here comes the cumulative review roundup of some of the films viewed. 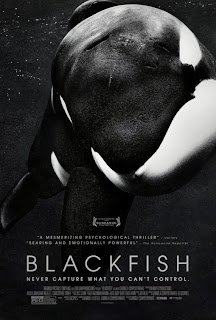 This shocking documentary directed by Gabriela Cowperthwaite tells the incredibly sad story of Tilikum, the killer whale.  Here his name is literal as Tilikum has killed three people since he was captured. Blackfish examines the circumstances and the handling of this magnificent creature and ill-treatment he has endured over the years from the fellow whales in captivity and the humans in charge who only view him as a money making machine.  With interviews from the former animal trainers who worked with him to orca researchers to tourists who witnessed Tilikum's first attack on a swimmer, Blackfish shows how repeated behaviours over the years have been ignored.  This documentary is a must-watch for us, we must not ignore what it is saying.  The home videos (mostly from tourists) are sometimes hard to see and especially hard hitting for me was the shot of the stuffed animal orcas that are so prevalent at the marine parks. I had one too as a kid, probably from SeaWorld.  I always believed the whales liked doing all those tricks and shows and never thought about what the whales might be going through.  Until now.  Blackfish is an eyeopener. I hope it leads to more changes in the laws of treatment of animals at marine parks than just putting the animal trainers behind barriers.  That's just the start. 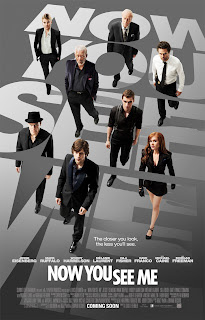 Now You See Me is light film that revolves around the world of magic and illusion featuring a cast of actors from ever dependable Morgan Freeman and Michael Caine to leads Mark Ruffalo, Woody Harrelson, Jesse Eisenberg and Isla Fisher.  A mysterious figure recruits four diverse illusionists to come together to perform illusionist events that end up robbing the rich and paying the poor (i.e. the audience).  Hard on their heels is a frustrated FBI Agent Rhodes (Ruffalo) and Interpol Agent Dray (Melanie Laurent) who aren't sure how much to believe.  There are some great exchanges between Harrelson and Eisenberg with Ruffalo as the believers and non-believers clash. The magic is, of course, mostly CGI and visual trickery of the movies but as Freeman's character Thaddeus Bradley keeps insisting that everything can be explained. It usually can.  Because of its star cast and shadowy man in the dark handling all the strings, Now You See Me is a enjoyable two hours spent. You won't be bored.

PS-Brace yourselves, a sequel is in the wings after this film's surprise success. 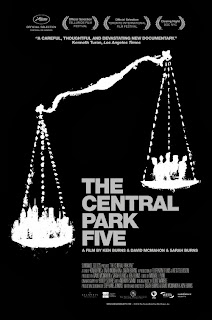 Another great documentary that aired on PBS earlier this year was The Central Park Five by Ken Burns, his daughter Sarah Burns and her husband David McMahon. It tells the forgotten story of five men whose lives were changed by one fateful walk in Central Park one April night. It became one of the decisions that they would regret the rest of their lives.  As the world knows by now, a young woman was raped that night in the park and the young men were the suspects who were later tried and convicted for the crime. Except these young men were innocent and yet spent their formidable years in prison and juvenile centers where their spirit may have been crippled but their conviction in their innocence never was. It is astonishing how facts and logic were completely ignored as a witch hunt to convict them and find a resolution to one of the most heinous crimes in New York City grew. The last line of The Central Park Five by Anton McCray (who we only hear) will break you silently, "The truth came out." Amen. 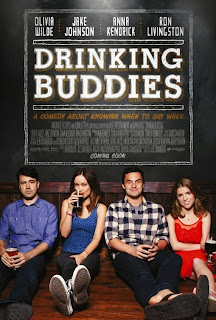 Drinking Buddies, a Joe Swanberg enterprise, tells the tale of two co-workers and friends, Kate (Olivia Wilde) and Luke (Jake Johnson) at a small beer brewery.  We see their work routines, their relationships with their significant others (Anna Kendrick and Ron Livingston) and their friendship and relationship with each other.  Each time, you think something will happen, the exact opposite happens.  The camaraderie and entanglements shown in the film are very real.  I really liked the casting and chemistry between Wilde (who's also produced the film) and Johnson.  A updated and sorted look at relationships today. 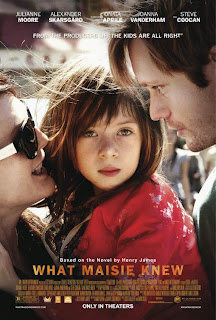 Young Onata Aprile as Maisie is entirely appealing and endearing as the titular character in this adaptation of Henry James' 1897 novel What Maisie Knew.  Here it has been updated to contemporary New York city with Julianne Moore as Maisie's rocker mom and Steve Coogan as her absent dad.  They repeatedly claim to love Maisie and want the best for her but instead become petty and selfish in their custody separations.   However, the lone ray of hope in Maisie's life turns out to be her parent's significant others, her new step-parents (Alexander Skarsgard and Joanna Vanderham).  The update works well, as in any era, the effects of neglect on a child has various consequences.  But the film eventually shows what Maisie knows, even at a young girl, that her parents may not be the best for her.  Watch for little Onata, she will steal your heart.


Directed by Scott McGehee and David Siegel; Written by Nancy Doyne and Carroll Cartwright; Based on the novel by Henry James; Cinematography by Giles Nuttgens; Edited by Madeline Gavin; Music by Nick Urata 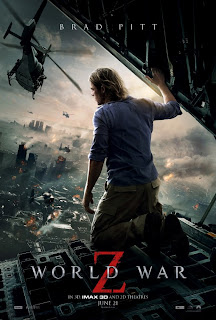 I had read all about the troubled production of World War Z and the various reshoots the film went through. Thankfully, the redoing does not show onscreen but I certainly felt that the length got affected because of it.  Brad Pitt is Gerry, a mysterious UN employee, who gets pulled back in the game when an unexplained virus affects the entire world.  Entire cities and countries are devastated when zombies, yes, zombies take over.  Gerry travels around the world to find Patient Zero and a cure but time is running out and no one in the world is as smart as him.  No, not really but it seemed that way to me.  Also why didn't no one else figure out that Gerry was bad luck, wherever he went, people ended up injured or dying? Anyway, what's not lacking in the film are the stunning CGI pieces of  entire cities being affected by the zombies, the sequence in Jerusalem especially.  And there's a harrowing piece set in an airplane that could only have been written by Damon Lindelof who surprise, surprise is one of the writers.  World War Z has a lot going for it but I don't know I kept feeling there was something more to be told. Unsurprisingly, I think it might be continued in the sequel. I'm still undecided if I will tune in for that.  I might end up reading the book on which its based after all.

I also saw the horrendous The Big Wedding, but I'm saving that one for my end of the year best and worst list. No prizes for guessing where it falls.